A very interesting article appeared in Mint on 7th Aug. 2015 titled “Bihar’s crime graph no better in Nitish era”. It showed how crime under Nitish era (2006-15) has actually increased over the years as compared to Lalu-Rabri era (1999-2005). Link of the article below:

At the outset, I make it clear that the Mint article is the inspiration of the current piece I am doing.

Lalu’s tenure from 1990-2005 has been termed as jungle raj by his detractors. The law and order situation in the state was pretty bad and kidnapping for ransom / looting throbbed as industries. In rural Bihar / villages, people actually were afraid of moving out of their houses in night. I remember while I was in school and used to go to my native place in South Bihar during summer holidays, parents were very particular about our returning to home before sunset after play. I recently visited my village after 15 years and can vouch there is no such fear nowadays.

While no doubt, the economy has done much better under Nitish led National Democratic Alliance (NDA) government after 2005 (this can easily be tracked by the GDP growth numbers published), the Mint article has created a doubt in the minds of people over the general perception that jungle raj has ended in Bihar under Nitish.

To get to the bottom, I have carried some research on data available on Bihar Police Website. On the website, cumulative crime data for Bihar from the years 2001 upto June 2015 is available.

However, a note of caution, Aaron Levenstein has said, “Statistics are like bikinis. What they reveal is suggestive, but what they conceal is vital.” Data can be interpreted to suit a person’s need. In this piece I will try to answer a few questions related to law & order situation.

While the general perception is a big “yes”, there is no public data available for free (or at least I couldn’t find) which can prove this point. For determining whether crime increased in Bihar during Lalu-Rabri regime, we need previous year’s figures (1975-1990) to conclusively say this and this is not available.

Has the crime rate reduced during Nitish rule in Bihar?

The data on Bihar Police Website is available from Jan. 2001 to June 2015. I have broken this period under different governments to calculate average rate of a particular crime during various tenures. June 2015 figures have been annualized to arrive at full 2015 figures.

In any year, if a Chief Minister has been in power for more than 6 months, the year is assumed to fall during his / her tenure. In 2005, Bihar was under President’s rule for more than 6 months. In June 2013, Nitish party Janata Dal United (JDU) broke away from BJP and hence 2013 is considered to be Nitish (alone) tenure as he was CM for more than 6 months. In May 2014, Manjhi became CM after Nitish resigned following Lok Sabha debacle and he was CM till Feb. 2015 backed by Lalu’s Rashtriya Janata Dal (RJD) and Congress. Since both Nitish and Manjhi belong to JDU it has been clubbed under one tenure. Though relations between Nitish-Manjhi soured later, Nitish and JDU can’;t escape responsibility from Manjhi’s deeds. Average crime rates during a particular tenure per crime type have been calculated to do the analysis.

Has the number of convictions increased during Nitish rule in Bihar?

There is another data available which is on conviction of criminals. But this is available only from 2006-12. Again can’t compare as data for Rabri rule not available. On a standalone basis, the no. of convictions have increased during Nitish rule from 2006-12, though last 2 years there has been a decline. 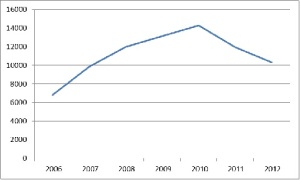 What can one conclude based on the above data points?

As said earlier, different people will derive different conclusions from the same data point. Let’s see what could various leaders / parties of Bihar would have to say on the above data table. This is really interesting and hilarious.

Nitish – Murder rate has declined during my tenure.

Lalu – Since I have been supporting this govt., murder rate has reduced.

Nitish – Dacoity rate has reduced substantially during my tenure by 39%.

Lalu – Since I have been supporting this govt., dacoity rate has reduced by 15%.

Nitish – Robbery rate has reduced substantially during my tenure by 35%.

BJP – Robbery rate declined substantially during our tenure by 35%.

Lalu – There is not much difference between dacoity & robbery. It should be clubbed. Since I have been supporting this govt., dacoity+robbery rate has in-fact reduced.

Nitish – These are petty crimes compared to Robbery & Dacoity which we have managed to substantially reduce.

BJP – Burglary rate has alarmingly shot up after we left Nittish govt. by 25%.

Lalu – What is burglary? Since I have been supporting this govt., dacoity+robbery rate has in-fact reduced. Moreover this was much less during Rabri rule.

Nitish – This is more of a social problem because youth is unemployed. The central govt. are to blame for failing to create enough job opportunities. Bihar has been neglected. Hum rozgar ke naye awsar paida karenge.

BJP – Theft rate has alarmingly shot up after we left Nittish govt. by 51%.

Nitish – Since Modi became the Chief Election Campigner of BJP and later PM candidate, they have spoilt the social fabric of the country and resultantly tensions between Hindus-Muslims have increased.

BJP – Riots rate has alarmingly shot up after we left Nittish govt. by 53%.

Lalu – When RJD was in power, we managed to create social harmony, riots were few. BJP has spoiled the communal harmony in the state.

Nitish – While we have managed to reduce kidnapping for ransom, we are taking steps to bring this under control.

BJP – Kidnapping has increased after we left Nittish govt. by 113%.

Nitish – This has declined substantially during my tenure.

BJP – This has declined substantially during our tenure.

Lalu – Since I have been supporting this govt., this has further reduced.

Nitish – Rate of Crime against Women per one lakh population of Women is amongst the lowest in Bihar (takes refuge in another data base). Bihar’s corresponding no. is 28 vs national average of 52.2 for 2013 (Source: National Crime Records Bureau).

Lalu – When Rabri ruled Bihar she managed to control rape incidents well. Successive govt. have failed. After I have supported this govt., rape incidents have further reduced.

Nitish – Road crime rate has reduced during my tenure by 15%.

BJP – Road crime was reduced during our tenure, after that it has increased under Nitish rule.

Lalu – Since I have been supporting this govt., road crime rate has reduced.

Nitish – Bank related crime rate has reduced during my tenure by more than half.

BJP – Bank related crime rate has reduced during our tenure by more than half.

Lalu – The provision of private security agencies have led to reduction in bank robbery / dacoity.

So there is something to cheer about for everybody!

Law and order situation is a big issue in Bihar elections and all parties would use the data points to their advantage. Nitish would claim crime has reduced during his tenure. BJP would claim crime has increased post it left Nitish govt. Lalu would say crime has increased during Nitish rule when he was with BJP, since then it has reduced. Only the people on the ground are the best judge…

This article has been written exclusively for Niticentral.

9 thoughts on “Law & Order Situation in Bihar – A Statistical Perspective”