The three young Turks of Gujarat politics, Hardik Patel, Jignesh Devnani, and Alpesh Thakur, have joined the Congress or openly declared their support for the Congress party. These three individuals represent the Patidars, Dalits and OBCs of Gujarat, accounting for half of population of the state.

All the three were frustrated with BJP’s inaction on their demands. The bigger question is, “Can these three individuals make a bigger dent in the BJP’s vote share?“ For this we will need to find out whether these three
people are true representatives of the communities they claim to be leaders of.

There have already been a lot of criticism of Hardik Patel for declaring support to Congress and section of the community are alleging a sell-out. Similarly, in case of Alpesh Thakur, there have been accusations of him always being in the Congress, so, his joining the party is nothing new.

Can these three people rejuvenate their faith in the community and get them to vote for Congress? Do they have the sizable influence, which can turn the tables in favor of Congress? These are the things which one will need to keep an eye on in the run-up to the elections.

n the chart below.

Axis and India Today did an opinion poll on Gujarat elections and they reported that 10% of Patels support Hardik. This support roughly translates into 1.5% vote share. Even with this support, Congress would be lagging behind BJP by 8%-8.5% as historically BJP has enjoyed a lead of 10%. 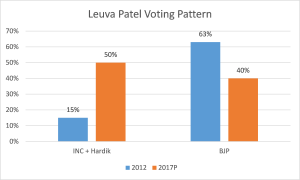 The real question is about the OBCs. OBCs generally all over India after Modi, at the helm of BJP, have backed BJP in large numbers. Modi is himself an OBC and hence, is able to draw votes from the community. So how much dent Alpesh can make is questionable.

Nonetheless, these three young Turks along with Rahul Gandhi will give some sleepless nights to the BJP in the run-up to the elections. Its only natural to have some sort of anti-incumbency after a long 25-year rule. Modi doing 50 rallies is a testimony to the fact the the contest is close. But even with the support of these young turks, Congress has an uphill task at hand.

Its also interesting to see how Congress will manage the contradictions within the three support groups. Patels and Dalits have had an acrimonious relationship on the issue of reservations. OBCs see Patels with suspicion and eyeing their pie of the reservations. If Patels get reservation they could most likely get it from Dalits and OBCs share.

Interesting times ahead in Gujarat…

4 thoughts on “#GujaratPolls: Even with support of young turks troika, it’s an uphill task for Congress”